From the get-go, cryptocurrencies have been a promising solution to centralized entities. Ethereum was one of the first platforms blockchain technology and its native token, ether, has grown tremendously in value since it launched in 2015. But now there is an issue with scaling: how do these new decentralized networks scale without breaking down? Enter Avalanche Subnets which promise near infinite scalability by using sharding protocols similar to those that are used for Bitcoin’s Lightning Network.

The “how many subnets can the avalanche platform support” is a question that has been asked for quite some time. Avalanche has released an article explaining how many subnets it supports. 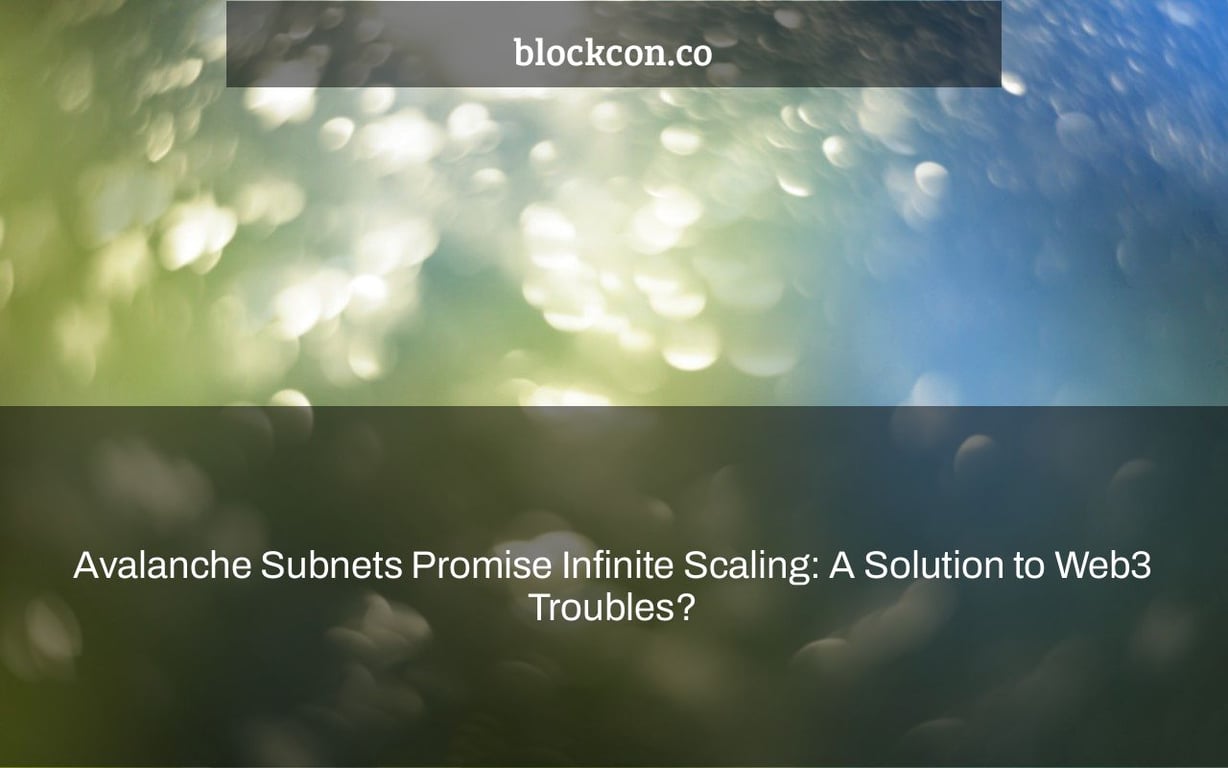 The Avalanche network unveiled a $290 million incentive program earlier this year, with an emphasis on scalability as a solution to Web3 issues by giving a platform – subnets – for different projects to grow into an app-specific blockchain ecosystem. However, the blockchain sector isn’t lacking of big promises (some of which don’t live up to the hype), so it’s reasonable to wonder whether Avalanche will deliver.

What’s all the hullabaloo about Avalanche subnets?

A study of the difficulties that subnets were created to address, or rather the gaps that subnets strive to fill in, is required for a more accurate appraisal.

Web3’s arrival on the scene was accompanied by a slew of promises, none of which can be described as hollow since the potential of this alternative vision of the web remains enormous. However, this new incarnation of the internet has encountered a number of challenges along the way, the most noteworthy of which being the requirement to manage large traffic on-chain.

With a small number of users, blockchains functioned well enough in the beginning, but as the number of users has grown, it has become more difficult to maintain stability. Long outages (downtime) hours or charge spikes as a result of congestion are relatively commonplace in today’s networks. Poor engineering can only take so much of the responsibility for networks collapsing under the strain of serving only a few million customers.

The ideal of hosting large-scale applications like financial services that serve billions of people has become unrealistic due to these obstacles. Avalanche subnets aim to solve this problem.

Subnets are designed to reduce the need for programs to compete for resources since they provide specialized block areas, allowing the developer to customize the user’s experience. Subnets prevent congestion and unpredictable cost spikes, ensuring a constant user experience.

Furthermore, as a network scalability solution, Subnets enable developers to choose from a variety of options, including as the tokens to use in the Subnet, the subnetwork validators, and the virtual machine to employ. Another difference from the innovative chains is that Subnets have on-demand scaling, which allows mass-scaling of applications in hours rather than days or weeks, resulting in a very profitable network.

All of this adds up to the reality that Subnets are built on top of a solid Avalanche network, which means that in addition to their benefits, they also benefit from the security, high throughput, and community that the PoS layer one provides.

Avalanche costs are about to drop even more.

The Avalanche network had competitive rates in the beginning (compared to networks like Ethereum), but it promised decreasing fees over time. The introduction of Subnets seems to address the gas problem and indicates that the blockchain design is scalable.

Subnets is a party to the fact that typical gas costs on the Avalanche network have been low since mid-May, dropping back to October 2021 levels. Even though there is still a significant amount of transactions, the fees are decreasing because Subnets enable the transaction volume to be diverted away from the main network.

After a ‘difficult’ relationship with Terra, Avalanche’s stance has changed.

The recent de-peg of UST and subsequent meltdown of LUNA had an impact not just on Terra, but also on companies having historical and present links to the network. Terra’s fall occurred in the same year that it teamed with Avalanche in a $200 million AVAX acquisition through Terraform Labs (TFL) and Luna Foundation Guard (LFG).

Last week, Avalanche produced a transparency report confirming that the AVAX assets under Terra remain immobilized, assuaging any concerns about a possible cross-chain impact on AVAX.

TFL had purchased 1.09 million tokens with a one-year lockup term, which is less than 1% of Avalanche’s weekly transaction volume. Avalanche further said that the status of the 1.97 million AVAX purchased by LFG for UST reserve holdings is still unknown. However, if that situation changes and the Foundation decides to sell, the Avalanche Foundation will devise a viable trading plan.

In other news, the Coinbase exchange upgraded the networks allowed for token exchanges through Coinbase Wallet on Monday, adding Avalanche and BNB Chain. The additional chains will be added to a list that already includes Ethereum and its scaling solution, Polygon.

Avalanche and the tokens on its network are receiving support for Coinbase Wallet’s built-in decentralized exchange trading functionality in the near future. Users may now experiment with a far wider range of tokens, including those not available on centralized crypto exchanges.

Users will be able to migrate their tokens to Coinbase Wallet, but they will need to keep AVAX in their wallets to cover network costs. It’s worth noting that the wallet examines numbers from several decentralized exchanges to guarantee that consumers get the best network costs possible.

Visit our Investing in Avalanche page to learn more about Avalanche.

The “list of avalanche subnets” is a solution to the web3 troubles that have been present for a while. Avalanche promises infinite scaling and fast transactions, but it’s unclear how they will be able to deliver on this promise.

World of Solana hacker gets scammed in community sting |