Trending Now
Ethereum (ETH) price drops by 14% in the...
Bitcoin could outperform stocks in 2022 amid Fed...
Flare Finance’s $EXFI Airdrop Complete, Trading to Begin...
Airbnb users want crypto payment options, according to...
Avalanche (AVAX) Made a New Attempt to Reach...
DeFilm streaming: A new DAO is looking to...
4 ‘Game Changers’ for BTC in 2022 –...
eToro cites regulatory concerns as it plans to...
‘Twas the Night before Christmas: A Cointelegraph Story
Retailers to drive crypto payments adoption: Survey
Home Cryptocurrency DeFilm streaming: A new DAO is looking to buy Blockbuster and revive the iconic brand
Cryptocurrency

The company’s plan is to focus on digital distribution and offer both de-platformed movies as well as a service that would allow users to download YouTube videos.

The “decentralized film financing” is a new DAO that is looking to buy Blockbuster and revive the iconic brand. DeFilm will be the first blockchain-based streaming service in the world, with no central authority controlling it. 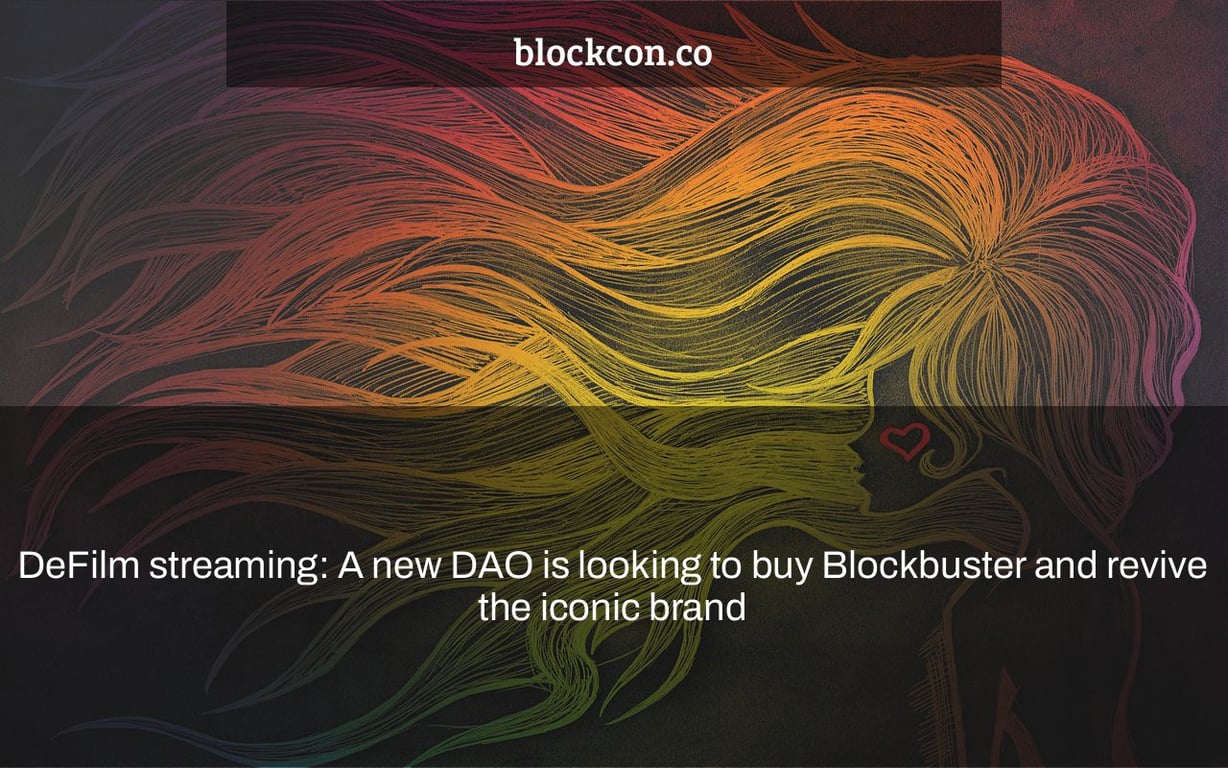 BlockbusterDAO, a new decentralized autonomous organization, is attempting to resurrect the historic Blockbuster brand and bring it into the Web3 age.

The brand’s continued prominence in the United States gives it an ideal base for revolutionizing the film and television industries’ decision-making and finance, according to BlockbusterDAO.

A bold effort to move a cult brand into the Web3 era.

While Decentralized Autonomous Organizations (DAOs) have been around for a while, it wasn’t until this year’s debut of ConstituionDAO that the world took note of the unique organizational model. The spectacular success (and later failure) of ConstitutionDAO made DAOs a household brand, resulting in an avalanche of proposals for how to incorporate them into real-world use cases.

Decentralizing Blockbuster, an iconic brand of video-rental establishments in the United States, was one of the most ambitious, but yet quite possible, suggestions.

The concept for BlockbusterDAO was initially revealed on December 26th, when its developers said that the brand will be turned into a DeFilm streaming platform. The DAO intends to raise money to purchase the Blockbuster brand from its parent company, Dish, and transform it into “a pillar of Web3 brands and goods,” according to the statement.

The ambitious decentralization experiment’s architects argue that Blockbuster is the ideal canvas for the ambitious decentralization experiment because it offers the right blend of nostalgia and pragmatism. Blockbuster’s brand perception has improved dramatically after the business started liquidating all of its shops in 2013. According to the findings, there is a significant link between Blockbuster and streaming service chats, with about two million mentions of Blockbuster alongside other leading streaming services.

“Despite its one-to-one brand awareness, the firm was wrecked by awful leadership who were unable to pivot and make innovative business choices,” according to BlockbusterDAO.

The DAO feels it is time to resurrect the brand and breathe fresh vitality into it.

The group added, “A people’s brand should be owned by the people and managed by the people.” “Even the name, Blockbuster, suggests that it may be turned into a Web3 offering.”

The purpose of BlockbusterDAO is to develop the first-ever DeFilm project, which will transform the film and television industries’ creative decision-making and finance. The DAO intends to utilize the cash raised from users to buy movies, which it will then distribute to theaters through a partner, post on its own site, or lease to other streaming platforms.

A subscription plan based on ERC-20 tokens with resale value is also in the works for a Blockbuster streaming network.

On the consumer side, this might take a variety of forms, including film derivatives, IP relisting for public/private sale, and/or some type of incentive scheme for gathering consumer data.

BlockbusterDAO will develop a platform for content publishing and give ownership options to the casts and crews of productions sponsored via the DAO once it has gained enough traction. The possibility of integrating games is also being examined.

According to the group, there are other potential bidders for the Blockbuster brand. Another party has allegedly made an offer of $1.8 million for the brand, although they anticipate the ultimate price to be higher. BlockbusterDAO intends to raise $5 million via BlockbusterDAO NFTs, which will be sold for 0.13 ETH apiece, and will be used to purchase the BlockbusterDAO brand from Dish Network.

The most relevant daily news in the worlds of crypto, DeFi, NFTs, and more are summarized here.

Gain a competitive advantage in the cryptoasset market.

As a premium Edge member, you’ll get additional crypto insights and context in every story.

The “film cooperatives” is a new DAO that wants to buy Blockbuster and revive the iconic brand. The DAO will be looking for investors to fund the project, which is expected to incur a $300 million dollar investment.

Avalanche (AVAX) Made a New Attempt to Reach ATH in 2022, but its Price was Rejected