Mercury is a new Bitcoin wallet that provides both Layer 2 scaling and improved privacy. This article reviews the features of Mercury, including how to store different types of coins in it, as well as what issues they’re hoping to solve with their design choices.

The “best cryptocurrency wallet” is a Bitcoin wallet that offers Layer 2 scaling and improved privacy. It has been designed with the user in mind, offering a clean interface and easy to use features. The company behind the wallet also promises to keep their users safe by not storing any information on their servers. 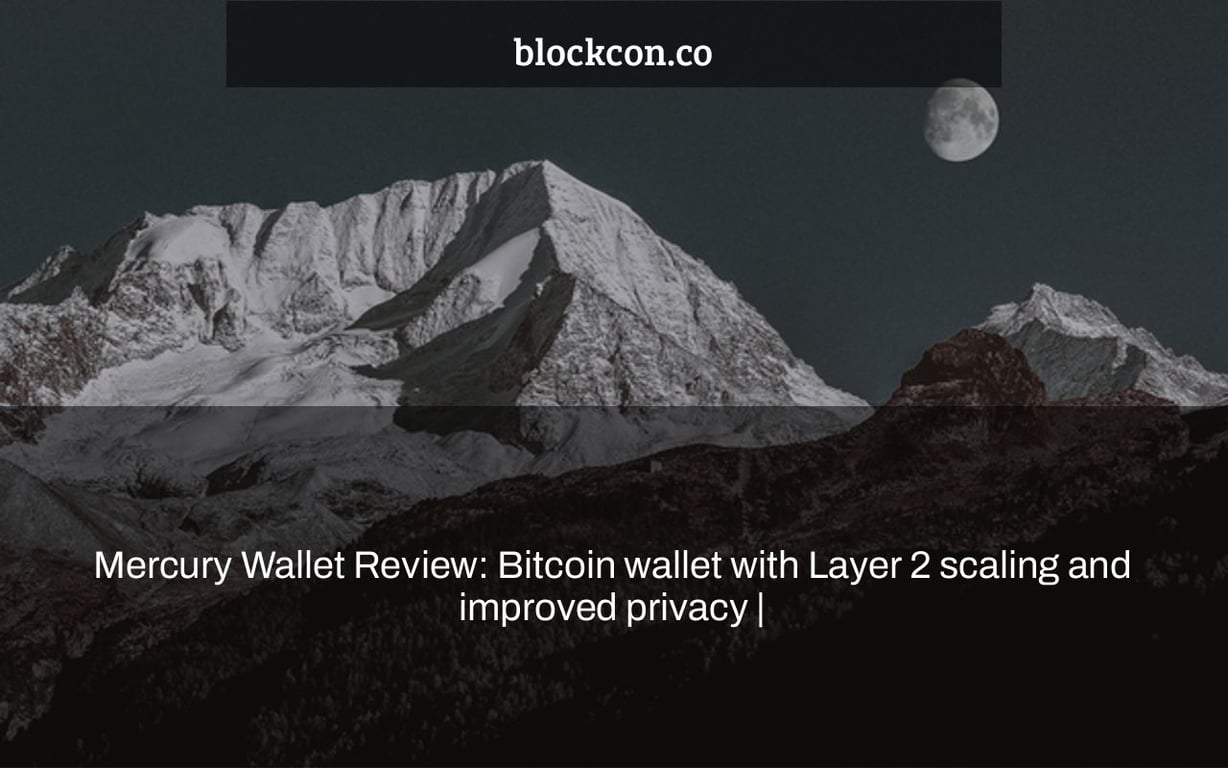 Bitcoin is often regarded to be one of the most private ways to transmit money, with payments hidden somewhere in the blockchain. The reality is that making a payment with Bitcoin is the most apparent way to do so. Every Bitcoin transaction is recorded on the blockchain, a public ledger, unlike a typical bank, where your data is kept private.

Mercury Wallet is a relatively new Bitcoin wallet. It is based on the new Bitcoin layer-2 scaling technology and uses the concept of statechains.

As a consequence, the wallet will be able to receive BTC deposits (UTXOs) with no transaction fees. Because funds may be securely transferred between owners without requiring an on-chain transaction.

As a result, you will be able to swiftly transfer total custody of a Bitcoin amount to anybody as the owner. This increases privacy while lowering mining costs.

The unspent transaction output (UTXO) concept, which is the basic thing that creates value and ownership in a cryptocurrency like Bitcoin, is used by Mercury wallet. The UTXO is identified by a transaction ID, or TxID, and an output index number, or n.

The wallet also makes use of statechains, which are a Layer 2 scalability solution for Bitcoin. Statechains are cryptographic frameworks comprised of a succession of digital signatures used to transfer ownership of a statecoin from one owner to the next. Statechains, like the blockchain, are immutable, and they serve as proof that the statecoin has not been used again.

Statechains as a Layer 2 scaling option for Bitcoin

Scalability is the fundamental purpose of statechains. This layer may be accessed with the Mercury Wallet. Users may use this site to establish statechains and perform statechain transactions.

Let’s look examine statechains, the architecture that makes these new private transactions possible. The quantity of blockchain space available for Bitcoin transactions is extremely limited. If bitcoin supporters want their digital currency to be accessible to as many people as possible, they must discover a means to get around this limitation.

At the moment, the Lightning network is the most widely used method for scaling Bitcoin transactions. Lightning lets users to conduct secure transactions without utilizing any block space, leading in transactions that are faster and less expensive. In this view, statechains are comparable.

To send money, the user just sends the recipient the private key. Sending your private key to someone nearly always results in your whole bank account being stolen. The statechain provider, on the other hand, is supposed to protect the user and prevent this from occurring.

Because the Lightning network is more well-known, let’s compare and contrast it with statechains.

Statechain users do not have to worry about routing or liquidity issues as Lightning users do. Statechains make it simple to transfer the private key to another owner.

Unlike Lightning, a payment does not have to travel across a network, therefore there’s no risk of the transaction failing if one of the network’s hops is cash-strapped. Liquidity is likely the main challenge Lightning users face today, despite the fact that brilliant new solutions have come up in the hopes of making this problem more palatable. For larger payments where routing may be troublesome, direct statechain transactions are preferred.

Because the wallet enables you to trade statecoins with other anonymous users utilizing a blinded swap mechanism, you may use swapping to improve your anonymity. You must first validate that other Mercury users want to trade the same amount of Bitcoin as you. Mercury came up with the idea of a state currency to solve this problem. It holds a precise quantity of money, much like a coin or note.

To exchange statecoins with other Mercury wallet users, go to the wallet’s dashboard and select the Swap option, then Join Group.

To transfer statecoins with other Mercury users, click “Join Group.”

Another option is to click auto swap on the coin, which will keep putting the currency in swaps until you either leave the wallet or click Leave Group.

With the auto swap tool, you can automatically input your statecoins into swaps.

To transfer statecoins from one owner to another, Mercury wallet employs a simple procedure. The statecoin receiver initially generates a statecoin address with a SC prefix using a Bech32 encoded public key.

The sender must first enter the address into their wallet, which then communicates with the Mercury server to generate an encrypted transfer message.

The sharing of private keys has also been modified. As a consequence, the receiver’s new private key share is the only way to sign legal transactions with the server. The private keys of the previous owner are likewise made worthless.

For $19 per month, join today. Examine all advantages.